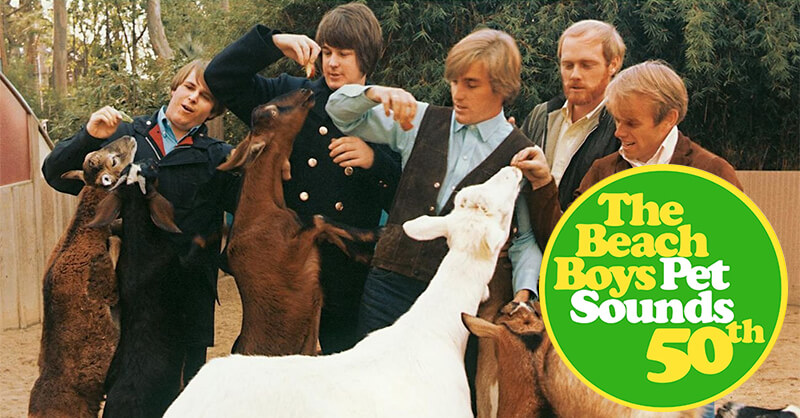 The Beach Boys iconic pop album, Pet Sounds, released 50 years ago which has been celebrated in an expansive multi-disc box set released this past May, is further explored in a compelling documentary about the making of the record, released this month on Eagle Rock Entertainment.  Entitled Classic Albums- Pet Sounds contains over 30 minutes of additional interviews not shown in the broadcast version.

The DVD is solid companion to the exhaustive  4CD/Blu-ray Audio collectors edition  which was presented by  EMI/ Capitol in a  hardbound book, featuring the remastered original album in stereo and mono, plus hi res stereo, mono, instrumental, and 5.1 surround mixes, session outtakes, alternate mixes, and previously unreleased live recordings.

Pet Sounds  was the band’s 11th studio album recorded between late  1965 and early 1966. It came about after Brian Wilson had a much publicized nervous breakdown, which caused him to leave the touring version of the band. He retreated to the recording studio, developing the classic album, which nearly every Greatest Albums of All Time list has listed it either 1st or  2nd only to The Beatles’ Sgt Pepper’s Lonely Hearts Club Band,

In the last 30 years I have interviewed all of the Beach Boys members with the exception of Dennis Wilson.  Here are some of the highlights of those interviews, as they relate to  Pet Sounds and the period around the making of that album:

Tell us a little about your song writing process. Most people have this image of you writing at weird hours of the night with your feet in a sandbox under your piano. Is this accurate?

Do you worry about playing so much Beach Boys material in your show and not being able to establish Brian Wilson in his own right?

The troubles you experienced on The Beach Boys’ 1965 Australian tour that caused you to quit touring are well documented. What was the reaction from the band when you said you would no longer tour?

How did they find Bruce Johnston?

Brian Wilson:   When I left, they got Glenn Campbell, first, for a little while. Then they got Bruce. They knew him and they just asked, ‘could you do this for us?’  And Bruce said, ‘yes.’ That was it.

There have been years of on going struggles between you and The Beach Boys, and you and other family members. Is all that over?

Brian Wilson:  We’re through with the lawsuits, there’s new songwriting between us coming on now.

I think there are a lot of us out there who believed you had under taken the solo albums and solo tours in effort to distance yourself from what’s left of the touring Beach Boys.

Brian Wilson:   No, my first love is The Beach Boys, but I do enjoy my solo career too.

So, you, Mike Love and Al Jardine are all friends again?

Brian Wilson:  Yes. Everything is cool, now. Al has been working with me now.

Pet Sounds  is clearly one of the greatest rock albums of all time. What were your feelings about the record at the time that it was made, and what are your feelings now that it’s been over 30 years since its

When you hear it now, obviously it still holds up for you?

The Beach Boys didn’t want to make it at first, isn’t that true?

Brian Wilson:   Well, at first the guys weren’t in favor of it.  But after it was done, they said, ‘You’re right Brian, and that IS an album that we should’ve done.’  I had to sell the idea to them. They didn’t like those songs when they first heard them, especially Mike. With Pet Sounds,  Mike did not like the songs; and he really didn’t like the direction we were going in. Then he got to sing two of the songs and once he got that- he liked the direction.

Paul McCartney has called Pet Sounds the main influenced for The Beatles’ Sgt. Pepper’s Lonely Hearts Club Band album.  Have you ever had a chance to sit down with Paul and talk about how the albums have affected each other?

Do you think the Beatles were your main competition when you were an active member of The Beach Boys?

Perhaps, it was better to have them in your own camp….

Brian Wilson:   Yeah, so like we were proud to be on the same label that they were on.

Can you talk about some of the classic Beach Boys hits you have written songs that have made a difference in your life?

There is a long history between The Beach Boys and The Beatles. In the 1960s you guys were friends and even went to study with the Maharishi in India together.

Mike Love: Well, yeah, we were friends and I went to India  with them.  I had a lot of conversations with Paul McCartney over there. I was the first person, outside of his girl friend, Jane Asher, to hear his song, “Back In The USSR.” I even suggested a couple things for him to do on the song, which he did. It was a magical time.

You sang on that song on The Beatles  White Album,  Didn’t  you?

Mike Love: No, not on the recording that came out on The Beatles album, but there is a tape of Paul and I doing the demo which was made on a small tape recording during our India stay. The Beatles actually sang on a birthday song for me, called “Happy Birthday Mike Love” which they gave to me over there as a birthday gift.  George Harrison’s birthday was in late February and mine is in late March, so we both celebrated our birthdays over that time in India.

Getting The Beach Boys through the periods where first Dennis passed away, and then years later, Carl’s passing, had to be tough. Can you talk about getting over these two losses?

Mike Love: Dennis  was always living the wild life with drugs and alcohol. We were surprised he lived as long as he did. It was not a fun thing at all to live through, but we were prepared for it. With Carl, it was different. He was always so focused and hard working.  He was always the big strong figure on stage and he sang so beautifully. That one was hard.

I have spoken to both Brian, and Carl before his death. Neither of those guys realized how important and pivotal those early Beach Boys recordings and songs were at the time they made them. They thought they were just making the next Beach Boys record and that was all….

Bruce Johnston:  That’s the beauty of it.  It’s like with your kids. When they’re really young and they’re being cute, they don’t know it at that age.  Brian loved the Beatles and he was obsessed in the healthiest of ways with Rubber Soul, and he wanted to make a complete album statement,  not unlike Frank Sinatra did with his Only The Lonely Album.  Nat King Cole, Johnny Mathis, Frank Sinatra, there were all very thematic all the way through,  but the guys in rock and roll weren’t. Brian was very excited about  Rubber Soul  and thought it was  very connected, more so than a lot of pop albums. Pet Sounds was probably was really the first true connected thematic rock album,  but he didn’t realize it. Pet Sounds  impact is like a time release capsule. It has taken all these years to get gain a stature. In the beginning, only  the most serious people knew what it meant, even before Brian did. Our label really wanted us to crank out the same old same old. They really didn’t get it, and Brian just didn’t want to do that.

Pet Sounds  is in one sense the band’s zenith, at least critically, but in another sense it was also the beginning of the decline of the band’s total support from its record company and with the chart making popularity with radio…

Bruce Johnston:  How could you not love “Still Believe In Me” and “God Only Knows”? It doesn’t really matter to me because Brian got his message out. I think it is a brilliant piece of work.

I was watching the Beatles Anthology DVD  documentary, and they talk about the Beach Boys in it quite a bit. Are you surprised by this?

Bruce Johnston:  We always wonder if there is life anywhere else? Imagine the Beatles and The Beach Boys on parallel planets doing what they do with the same results. I took Pet Sounds to London and I played the album for John Lennon and Paul McCartney via an introduction from Keith Moon. I have an old friend named Lou Adler who is a producer and owned Ode Records and the rights to The Rocky Horror Picture Show, and he took it there too. He played it for The Stones manager, Andrew Loog Oldham, and John and Paul were there, too.  So, it really got walked into them by more than just me. And they really got locked in, and you can hear that on “Here There And Everywhere” on the Revolver  album. That was influenced by “Wouldn’t It Be Nice.” Not to mention the whole concept of Sgt. Pepper was a direct result of conceptual approach we took to  Pet Sounds.  My son just went to the Grand Prix race in Monte Carlo. He was telling me that all the racers were hanging out at parties after the race, laughing and drinking champagne and patting each other on the back. And earlier that afternoon, they had been mortal enemies on the race track. It was like that between us and The Beatles. Actually, it was more between Brian and Paul McCartney. Brian probably set the level of competitiveness more than we did as a band. Still, both bands are still in awe of each other. We were then, and still are today. It is like my love of Sinatra. In the same way, I am in awe of some new groups like Radiohead. Their stuff has been brilliant for the last several years. There is always something going on. Listen to Christina Agualiera  and try not to image the visual image. You can tell by the way she is singing that she is listening to people like Etta James. She is good and she will survive herself. They have to reverse herself.

Bruce Pilato is a 40 year music industry veteran, who has covered entertainment for Variety, USA TODAY, Gannett News Service, US Weekly, Mix and others. He is president of Pilato Entertainment Marketing & Media LLC and also teaches music industry courses for The University Of Rochester’s American Institute of Popular Music and Nazareth College.